It's usually a fun day when we take Noli to the park. Not so this particular day!

We picked her up from her soccer game and went to meet Mommy and some friends and go out to eat. Where are we eating, Noli asks first thing.  Zoe's, we say.

and so it continued the entire drive of around 20 minutes or so. Do you know how long 20 minutes can be when a kid is yelling in the backseat and will not accept any amount of reasoning? And naturally we were too early to go to the *dreaded* restaurant. In text conversations on the phone, Mommy suggested meeting at Trinity Park which was close to the *dreaded* restaurant. We figured Noli would run off some of her irritation and be ready to go to eat in peace. 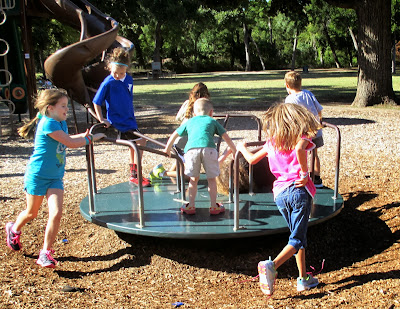 Noli, in her blue soccer uniform is taking a free ride

As soon as we got to the playground she was airborne straight to the merry-go-round. Now the parks she usually goes to don't have merry-go-rounds so that's probably why she was stuck like glue to this one. At first there were only a few little kids on it, and then BOOM kids came out of nowhere and jumped on. Round and round, I was getting dizzy just watching them. 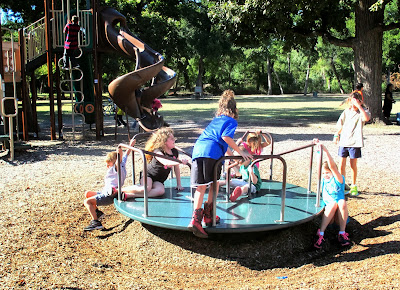 Then we get the call from Mommy -- they are headed to the restaurant. So I go over to get Noli -- who of course will absolutely not get off that merry-go-round. I am NOT getting off, I am NOT going to Zoe's. They still don't have anything I like to eat. I'm NOT.

I finally stopped the merry-go-round and told the other kids that I was going to have to get her off, and between me unclenching her fingers and Papa picking her up, we got her off that blasted merry-go-round....

Only to have her run straight to the climbing thing with the slides. Zoom! She goes to the side you can't see in the pic, the side that has those round things you hold onto and swing your way across.

Then she's hoisting herself up on TOP of the ladder that goes across and gets in a rather precarious position. I'm right under her, scared that she might fall. But she carefully places her feet (which by the way, are in slippery cowboy boots and not sure footed tennis shoes) IN THE HANDHOLDS and manages to get across and over to the platform without falling. And without my heart attack that I surely thought was going to happen. I told her she could go down the slide ONE time to get off the thing, and then we were leaving.

She was kind of subdued so I guess her little excursion scared her more than she let on.

We got in the car and it started again.... NO! I'm NOT going there.

Well, honey, you are... and you know what? She found something she did like, and enjoyed her meal. And the rest of us grown-ups were able to enjoy ours!

Next time, I think we'll just ride the train!

~ sharing Noli's Trinity Park excursion over at Miss Jenny's for Alphabe-Thursday  where we are studying the letter T
~ sharing her blue uniform, the blue merry-go-round, and the blue sky over on Blue Monday
~ sharing over at Grandma's Briefs for GRAND Social

Posted by SarahBeth at 6:02 PM

I'm glad it worked out in the end. The train does sound like a plan the next time! :)

We've gotten lucky and Amara has never pulled that on us -- but I have seen her stubborn streak try to win arguments with her parents like this more than once. They can't be Angels ALL the time, right?!

Oh goodness! Well I'm glad you got to enjoy the meal. :)

I had that same conversation one thousand times when my kiddos were little and now I have it with my grandkids!

The park and playground look nice! My niece can be persistent like that too :)
Glad Noli found something she liked after all!

She sounds like a very opinionated little girl! I have one of those too, but she's only 2!

So happy that Noli found something she liked :o) And, whew! Lots of energy expended... from both Noli on the playground and you all making sure she was safe.

I can't wait to visit our grandbaby in a few days...she is only 18 months, but I am sure I will be kept on my toes :o)

How well I remember those days of kids screaming in the back seat!!! I would make up a song about the object of their disagreement. One day, my daughter said, "Mama, you have a song for everything!!!!!"

Grandchildren are supposed to be angels and ONLY fun all of the time.

Which is why I am always dismayed and frustrated when Brent acts up and drives me crazy. So I can sympathize, lol! :)

This is so real - not every Grandma experience is sweetness and light - but we love them anyway!

Some days kids can be a real challenge...but sounds like you handled it well. ;)

I am glad things worked out at the end..

Well, Sarah, I'd say that you sure were tested by that little one in blue. Thanks for sharing your blues.

They sure can rattle the nerves with the stubborn streaks, can't they? Glad it worked out! All's well that ends well... until the next time, at least. Cute replay of the day. :-D

If Noli is a soccer girl she will turn out alright - Soccer girls are the best!!
I have visions of you whizzing down the slides trying to keep up...
I think "all's well, that ends well' sums it up. Glad you had a lovely meal afterwards. I'm sure you would have worked up quite an appetite yourself!!
Wrenx

She is definitely a strong-willed one...

And I have dealt with tiny, little "tantrums" like this a time or two...

I think it is totally funny when the thing they were so adamantly against turns out to be something they don't mind after all - Good times! (((winkwink))) 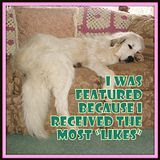 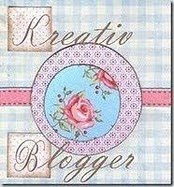